How to climb the Kawah Ijen volcano without a guide

Speechless. Seriously, that is the only emotion which can accurately describe how I felt sitting in the middle of the Kawah Ijen crater while overlooking the most acidic lake in the world and waiting for the sunrise.

I was longing to do something different and adventurous for a long time. So I decided to organize a motorbike trip from Bali to East Java to climb the Kawah Ijen volcano.

Me and my partners in crime boarding to Java.

2 other friends and I were pretty excited, but eventually after more than 3 hours driving to the harbor in Gilimanuk, we couldn’t wait to just be in the bed and rest a bit. Fortunately, a ferry to Java only takes 45 minutes (24.000 Rp one way).

Our first plan was to climb Kawah Ijen during the night on Sunday, but Sam, the manager of the hostel Kampung Osing Inn where we stayed, convinced us to do it just after we arrived. An alarm clock rang at 12 am, we jumped on our motorbikes and drove 1,5 hour from Banyuwangi to the base camp in the village of Paltuding. Driving through a forest on the curvy, narrow, but still well-maintained roads was exciting, even though my fingers started to go numb from the cold. I have no clue what the outside temperature was, but it felt like 0 degrees indeed – so don’t forget warm clothes!

At the volcano’s entrance ticket counter, I had my first local moment. I have a KITAS, or work permitt, which means I am almost a citizen of Indonesia, so I showed my Indonesian student card which rapidly reduced the entrance fee from 100.000 Rp to 5.000 Rp (during the weekends is the fee 150.000 Rp)!!! Even now I can’t believe it 🙂

No guide is needed for this volcano.

Just don’t forget a torch/flashlight, a proper gas mask, because the smell of sulfur will be strong and is dangerous to inhale. Make sure to follow the road. The first half of the hike is steep until you reach a canteen, after this point it’s only a few more steep meters before going flat for 800 meters. You’ll then be at the edge of the crater and will be able to see the famous Blue flames. They are magical.

The Blue flames inside the crater.

Be extremely careful during the descend down to the crater, the terrain is slippery and rocky. To sum up, we started the climb at 2 am and it took us 1,5 hour to hike to the edge and descend down inside the crater.

Afterwards, we climbed up a bit inside the crater to the point where it is possible to overlook the whole lake. Even though, it was almost 4:30 am, the temperature wasn’t higher than 10 degrees. While the sun was rising, we slowly started to see the turquoise lake slightly covered by sulfur smoke. It was then that I realized what I had accomplished. It was a powerful moment for me.

The descend back to Paltuding took around an hour and it was then that the daylight showed us where we were actually climbing and just how dangerous it was.

At the edge of the crater.

I consider this volcano less difficult to climb than Mount Batur in Bali.

The 1,5 hour back to Banyuwangi felt like the longest 1,5 hour of my life. Lack of sleep combined with a long hike was very exhausting. If you for some reason can’t drive a motorbike, you can hire a driver from Banyuwangi to Paltuding and find an accommodation there. My suggestion is to book in advance, places to stay have a limited amount of rooms which are often booked in advance.

The base camp in Paltuding from where we started the hike.

An unexpected bath in a waterfall? Why not?

Sam mentioned that just 15 minutes away was a small waterfall we might want to visit on the way back from Paltuding. The place was just so nice, surrounded by high trees with a bamboo bridge. Suprisingly, there was not just one waterfall but two! A good fresh bath in a waterfall can never be bad 🙂

It was an absolutely stunning experience, to climb Kawah Ijen with a sky full of stars above, face the blue flames and catch a sunrise all making this trip very unique. In addition, I am so proud of us for doing it all on motorbikes! 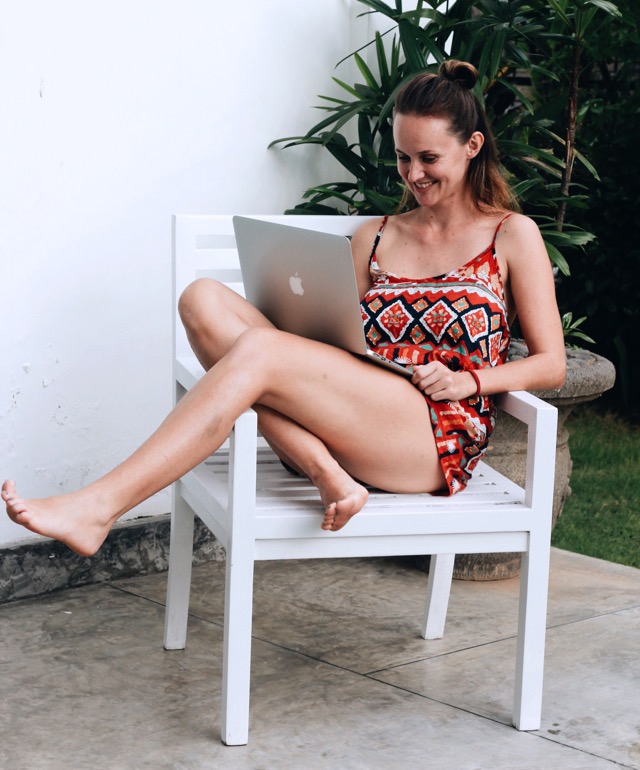